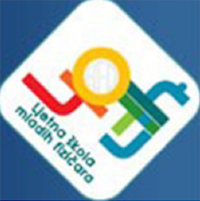 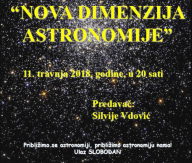 Dr. Silvije Vdović on Wednesday, April 11, 2018, held a lecture entitled “The New Dimension of Astronomy” in the premises of the Zagreb Observatory, Opatička 22.

The recent discovery of the passing of the gravitational wave as a result of the collision of two neutron stars represents a major turning point in the astronomical world. Even though gravity waves detectors have been conceived from the very beginning as a sort of messenger who will, by determining the exact position of the source, focus the attention of the rest of the astronomical community on that area of the sky to gather as much information as possible about the observed event little who believed that predictions would be respected to such an extent is such a success. The study of this important event, in which almost a quarter of the world’s astronomical community was finally involved, is a new direction in the Universe research where data from traditional telescopes, neutrinos detectors, and now gravity waves detectors are shared and compared with the aim of deeper understanding of the nature of the universe. It is also a justification for awarding the Nobel Prize for Physics for 2017 to Weiss, Thorne and Barish for their role in building the LIGO Observatory and detecting gravity waves.